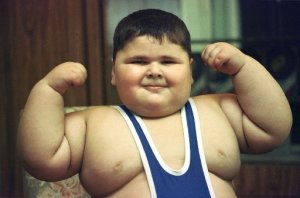 Why All Children should be on Diets: Response to Backlash over The Heavy by Dara-Lynn Weiss

Listened to radio show this morn where people were freaking out, aghast that a mother (Dara-Lynn Weiss) put her 7-year old daughter on a diet & then wrote book about it (The Heavy).  Over and over parents vehemently defended the position that we shouldn’t restrict our children’s eating.  Really???

When did ‘diet’ become a four letter word?  I was never good at math by the way.  What about ‘proper diet’ or ‘healthy diet’?  Diet does not mean starvation!  It should mean healthy nutrition.  Ever go into McDonald’s and see a morbidly obese person scarfing down a portion sufficient for 3?  Most people have and a lot think something like “and they probably wonder why they’re fat.”  Somehow, these are the same parents that would just as soon push clergy in front of traffic for suggesting that they should restrict what their child eats.

Newsflash: The habits you model and teach your children are likely to be maintained into adulthood, including and especially dietary habits.  If you teach them it’s OK to overeat hamburgers and ice cream at every meal as children, why would you expect them to ‘spontaneously’ adopt healthy eating habits as they advance into adulthood?

Wanna hear something else scary?   Once someone is obese for a while, the body adapts and that becomes the body weight that their biology will defend as necessary for survival.  Physiologically speaking, the body then literally reacts as if the person is starving to death when they try to return to a healthy body weight.  This one of the main reasons why diets typically don’t work and we say ‘don’t just diet.’  Unfortunately, surgery has become the only long term effective option once someone (even a child) is obese for an extended period of time.  Point is, don’t contribute to your kids getting to the point where surgery is the only option they have of being healthy.  Please!!