The truth about arsenic in apple juice…

Quick background on organic vs. inorganic arsenic: Organic arsenic is naturally occurring, almost unavoidable and relatively safe.  Inorganic arsenic, however, is quite dangerous- it’s the same chemical contained in pesticides and is associated with skin lesions, developmental problems, CVD, diabetes and even cancer.  So the new regulations are for inorganic arsenic.

New level is 10 parts per billion, which is the same standard for drinking water.

Consumer groups doing a good thing by pressuring the FDA to pay close attention to inorganic arsenic levels in food.  However, concern about arsenic in apple juice is actually a little bit of a red herring. Regulating dangerous chemicals is always a good thing but the vast majority of apple juices on the market contain levels well below even the new standard, which means below that in drinking water and even in most cases, what’s found in bottled water.

Check out this clip from ABC: 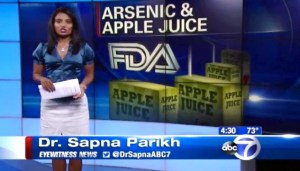 So for me, I don’t limit intake of apple juice.  What I am concerned about and where I do limit intake, however, is in rice and rice products, particularly brown rice from the southern central US.  Just for frame of reference, last year Consumer Reports tested 88 samples of apple juice and the average total arsenic was right around 5 ppb (standard for bottled water).  Later that year, they tested rice and rice products and found total arsenic in the hundreds (up to > 900 ppb) in only ¼ cup of rice and the average was more than half of total arsenic was inorganic.  If you do the math, it shouldn’t take long to realize that this is a MAJOR problem!  Thus, worrying about the arsenic in apple juice is like worrying about the fat content of skinless chicken breast and ignoring the 3 lbs of bacon you had a breakfast.

Columbia University trained, Dr. Ochner is a PhD scientist conducting medical research on nutrition & dieting. In 2012, Dr. Ochner left the faculty at Columbia to become Director of Research Development & Administration at the Icahn School of Medicine at Mount Sinai in NY. His research is funded by the NIH, & he has published dozens of scientific articles & 2 books on nutrition, with a 3rd on the way. He speaks regularly to international audiences & appears widely in the media, including the Wall Street Journal, New York Times, World News w/Diane Sawyer & Good Morning America. Consulting, media & speaking requests should be directed to cochner@mindfigure.com